According to a new report from Pike Research, the market for energy storage in commercial buildings is poised for significant growth in the years ahead. Why? The market momentum toward greater energy efficiency in commercial buildings, the proliferation of smart grid technologies, and the growth of renewable energy installations both on a distributed basis as well as at the utility scale are all driving heightened interest in the opportunity for energy storage in commercial buildings. Buildings represent a large portion of total energy consumption, and many of their occupants are actively seeking ways of managing their energy costs through efficiency measures as well as innovative means of optimizing their expenditures under time of use (TOU) electricity rates and other variable pricing structures.

Pike Research forecasts, under a baseline scenario, that the uninterruptible power supply (UPS) market, which is currently the largest segment within this industry, will increase from $3.4 billion in 2011 to $4.8 billion by 2016. 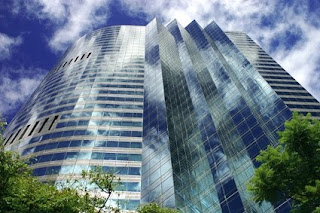 Another key emerging segment includes ice-based thermal energy storage (TES) custom systems, which Pike Research anticipates will rise from $15 million in revenue in 2011 to $37 million by 2016. Under a more aggressive growth scenario, this market could reach as high as $92 million during the same period. Ice-based TES rooftop units in North America will also experience strong growth, increasing from $12 million in 2011 to $123 million by 2016 under a baseline forecast scenario.

“Energy storage presents a compelling opportunity for building owners and managers,” says research analyst Eric Bloom. “These systems offer the ability to manage operating expenses in the face of aggressive demand charges and dynamic pricing schemes, which are on the rise throughout North America.”

Bloom adds that, while UPS and TES will continue to lead the market in the foreseeable future, significant opportunity also exists for commercial buildings to utilize flow batteries and lithium ion (Li-ion) batteries for energy storage as the economics of those technologies continue to improve.

Pike Research’s report, “Energy Storage in Commercial Buildings”, explores the market potential for energy storage in commercial buildings including an examination of market issues, technology issues, and the competitive landscape in this emerging sector.
Posted by Unknown at 7:00 AM