A $1.45 billion loan guarantee has been finalized for Abengoa Solar Inc.’s Solana project, the world’s largest parabolic trough concentrating solar plant. The announcement was made by U.S. Department of Energy Secretary Stephen Chu. Located near Gila Bend, Arizona, the 250-megawatt (MW) project is the first large-scale solar plant in the United States capable of storing energy it generates. Large insulated tanks filled with molten salt will be used with concentrating solar power (CSP) to store the heat. This stored heat can then be used to produce energy during periods of low or no sun, including the evening hours. Solana will produce enough energy to serve 70,000 households and will avoid the emissions of 475,000 tons of carbon dioxide per year compared to a natural gas burning power plant.

Molten salt is used in solar power tower systems because it is liquid at atmosphere pressure; it provides an efficient, low-cost medium in which to store thermal energy; its operating temperatures are compatible with todays high-pressure and high-temperature steam turbines; and it is non-flammable and nontoxic. In addition, molten salt is used in the chemical and metals industries as a heat-transport fluid, so experience with molten-salt systems exists for non-solar applications. 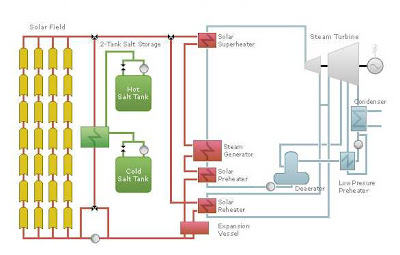