Sopogy, a Honolulu solar power technology company, is planning a 200-megawatt solar thermal project for the China's National Utility, The State Grid. The company signed a memorandum of understanding last Thursday with China’s Yu Hao Long Corp., which designs thermal-energy generators (see photo). The MOU also formalized a goal to demonstrate the combined system in Hawaii during the Asia Pacific Economic Cooperation (APEC) which will be hosted in Honolulu. 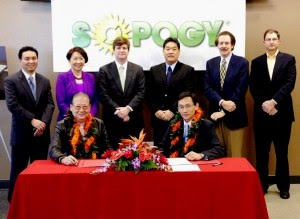 The two companies have been collaborating on a 5-megawatt demonstration project at Kalaeloa on Oahu.

“Sopogy’s proprietary concentrating solar platform produces high-temperature heat which is a robust energy source for clean power generation,” said Darren T. Kimura, President and CEO of Sopogy. “The heat we produce is captured in thermal energy storage tanks and helps to produce firm and reliable energy during the day into the evening peak. This makes for a perfect complement with a Stirling generator and the China energy grid.”

Kimura and YHL’s Dr. Francis Fung collaborated for over a year to identify and develop a plan for the mass production of YHL’s low temperature, hybrid Stirling engines which use ready-made auto components for utility scale power generation.

Most recently, the 5-megawatt Kalaeloa Solar One broke ground on the island of Oahu which will feature Sopogy’s MicroCSP technologies.

MicroCSP technology consists of parallel rows of proprietary parabolic mirror collectors, optics and an integrated tracker to concentrate the sun’s energy on a centrally-located receiver tube and re-circulate heat transfer fluid within the system. The generated high-temperature heat will be used in conjunction with the hybrid Stirling engine to provide a renewable source of power. Sopogy’s two megawatt solar thermal field has been operational in Kona, Hawaii, U.S.A. since March 2009.

China's State Grid (SGCC) was established on December 29th, 2002. It is a government-owned enterprise approved by the State Council to conduct government authorized investment activities. SGCC was ranked the 8th in the Fortune Global 500 in 2010, seven ranks higher than 2009, and is the largest utility in the world. It is focused on the construction and operation of a power network that covers 26 provinces, autonomous regions and municipalities. Its service area represents 88% of the national territory, supported by more than 1,500,000 employees to serve a population of over one billion.