In what is described as one of the most innovative energy efficiency initiatives to date in Canada, the city of Summerside, Prince Edward Island’s second largest city, has selected Tantalus Systems Corp. to provide smart grid technology that will tie together the municipality’s fiber-to-the-meter network, wind generated power, and in-home energy storage devices. Together, these will enable the city to optimize the performance of its distribution network and significantly reduce its carbon footprint by providing consumers with a reliable, low cost source of renewable energy.

The Tantalus system will allow Summerside to precisely measure, monitor and control devices connected to its distribution network including special furnaces that can be charged with power generated by wind turbines. The ability to automatically turn energy storage devices on and off when wind is on the grid using two-way Tantalus technology will enable Summerside to quickly shift to stored power whenever peak load conditions arise, while using the less expensive energy to heat homes at night. Tantalus’ command and control functionality is also used by several utilities to regulate consumption on direct load appliances such as hot water heaters and air conditioners that are enrolled in load control programs. Time-stamped records verify that the action has taken place and indicate whether a customer opted out of an event, which is important for accurate billing and determining how much power was actually saved.

Terry Murphy, Summerside’s Chief Administrative Officer, said that wind is expected to satisfy roughly half of the city’s power needs over the course of a year. Furthermore, when the wind is blowing at full tilt, it can sometimes produce a surplus of energy which Summerside can sell back to other utilities, accelerating the payback on this large infrastructure project. “But you can’t flip a switch and turn on the wind,” he added. “Our ability to capture as much clean power as possible in the storage units whenever the wind is blowing, and then quickly access this power source as needed is what makes this system so efficient and unique.”

Summerside’s wind farm has been providing power to the city for over a year. Roll out of Tantalus smart meters and energy storage devices begins in January 2011. The city will run fiber to each home participating in the program.

Summerside is the seventh utility to deploy a Tantalus Homerun™ Network which leverages a municipal fiber optic network for Smart Grid functionality, and which can also be used as the backbone for triple-play media including internet, telephone and television. Its fiber-to-the-meter network supports upload and download rates of 1 Gigabit over an active Ethernet connection, which establishes the city as one of the fastest, most connected cities in North America.

“The Tantalus Homerun Network provides the speed needed for tightly coordinated demand response applications,” said Eric Murray, Tantalus President & CEO. “By adding a high proportion of renewables to the energy mix, Summerside can greatly reduce its need to purchase energy from the mainland as well as reducing its reliance on the diesel powered generators used to supplement the power supply during critical peak periods.” 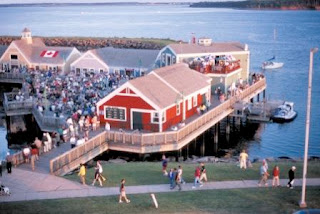 The city expects to reap both economic and environmental benefits from its broadband network. The advanced infrastructure is attracting interest from high technology businesses which require a high speed, high capacity network for research & development. Recently, Summerside held discussions with automotive firms interested in using the city as a test site for electric vehicles, which can also serve as power storage units.

Murray concludes: “Summerside realizes that building a Smart Grid is not a single step or a single technology, but a series of projects that must interoperate as a unified system. We’re very excited to be involved in this groundbreaking project, with a team that is bent on creating a clean, green and economically robust community.”
Posted by Unknown at 12:27 PM