This article by Brad Roberts, the power quality systems director for S&C Electric Co. and serves as the executive director of the Electricity Storage Association was originally published in POWERGRID International. It is reprinted with permission.

The concept of storing electricity generated in a utility grid has been tried since the beginning of the power industry. In the U.S., large-scale storage projects flourished in the 1960s, '70s, and '80s as utilities added 18 GWs of pumped hydro facilities to support the rapid build out of the fleet of nuclear power plants across the nation. Nuclear plants run best at higher power ratings, so pumping water in these hydro plants presented ideal off-peak loads during nights and weekends when customer demands are lowest. This method of grid storage has been improved during the past two decades, and today these plants provide more than 2 percent of the total capacity of the national grid.

Now, as the grid faces a rapidly growing component of renewable energy sources (wind and solar), the job of balancing generation sources and load demands is becoming more challenging. With most regions of the U.S. trying to achieve renewable portfolio standards (RPS) of 20 to 30 percent in the next 10 to 20 years, stable and reliable control of grid voltage will be a bigger task for utilities and system operators. Utilities and regulators know they must deal with this, and major changes are in the works.

The biggest steps started in 2009 with massive stimulus investments by the U.S. Department of Energy (DOE) to accelerate the development of smart grids throughout the nation. Demonstration projects totaling more than $1.6 billion were announced with implementation occurring in 2010 and 2011. The projects cover every aspect of smart grid technology, from intelligent meters in homes to automation of distribution circuits to energy storage devices such as flywheels and batteries at different levels of the distribution network.

Starting five years ago, American Electric Power (AEP) took the lead in determining the value of adding fairly large amounts of battery energy storage in substations. The distributed energy storage system (DESS) approach was used to test peak load management and improvement of system reliability by deploying systems in sizes of 2 MW with seven hours of support time. Figure 1 shows one of the systems installed in an Ohio substation. 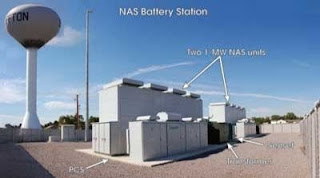 Battery systems like the one shown in Figure 1 provide a new alternative for utility power management in a distribution substation. By having a fixed amount of clean peaking energy in the station, a utility can delay capital upgrades by several years and provide reliability improvements to customers served from that station. In the example in Figure 1, a 2-MW sodium sulfur (NAS) battery is used to support hundreds of homes and businesses connected to many miles of distribution circuits.

Should the transmission line feeding this station experience an outage, the customers have power restored when the station automatically runs in an islanded mode using battery energy to power the customer loads. Any problems downstream of the battery, however, can be fixed only by dispatch of repair crew. If a limb falls on an overhead line, some customers will lose power. In addition to losing power, the issue of load growth must be addressed, and eventual upgrades of circuits are planned based on load forecasts. Dealing with ways to continually improve service reliability and load growth led AEP to tackle placing energy storage closer to the edge of the grid where power is finally delivered to customer meters.

The term community energy storage (CES) defines an approach where smaller packages of battery energy storage, typically 25 kW with one to two hours of back-up time, are deployed in neighborhoods on street corners or along backyard utility rights-of-way. Figure 2 shows a depiction of a CES unit of this type adjacent to a standard utility transformer feeding six to 10 customers. 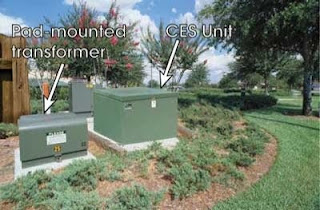 
The CES units are connected on the low-voltage side of the utility transformer and protect the final 120/240-volt circuits to individual customers. Placing a utility-controlled device at the edge of the grid allows for the ultimate in voltage control and service reliability. Meeting this challenge of even greater control of voltage at the point of customer use is a major departure for traditional utility system control philosophy, but it’s needed to deal with a rapidly changing customer load profile. While customers are adding more sophisticated electronic loads (computers, appliances, etc.) requiring greater service reliability, new, even larger loads—such as plug-in hybrid electric vehicle (PHEV) charging units—will be added randomly in the grid.

On top of these changing load patterns, more solar arrays on rooftops will introduce a growing amount of energy flowing back into the grid when solar generation exceeds the power demand of the specific customers. Today, a neighborhood with a significant number of solar roofs can generate a fair amount of energy that dissipates back into the utility network during the solar peak period, which precedes the customer load peak by two to three hours each workday.

CES units located throughout the network would allow that excess energy to be captured locally with less line losses and re-dispatched back to the same customers when needed. Another problem the CES units could deal with during the solar peaks is precise control of the local voltage as clouds pass over. As more customers add solar, the voltage can be impacted as clouds pass by. As clouds shadow a large number of arrays, the power output drops quickly and results in sudden voltage drops. The power electronics used in the CES devices have the ability to act as an instantaneous capacitive volt-ampere reactive (VAR) compensator to maintain proper voltage in the local area. The sun can re-appear quickly and result in the voltage’s attempting to rise fairly rapidly. The CES electronics would counter this the same way as a reactive VAR compensator to prevent a voltage sag.

The addition of more PHEV loads will affect load demands. Most vehicle charging should occur slowly at night, but the pattern will be hard, if not impossible, to control. If an abnormal amount of quick charges were to take place in a given area, there could be stress on local distribution transformers.

Utilities have tended to oversize these small distribution transformers to control voltage and compensate for the starting inrush current of air conditioning compressors in homes and prevent resulting voltage flicker. Having extra utility capacity available in local CES units will alleviate this contingency. There will be even greater dynamics in local distribution circuits. The solution will be truly smart grid where improved load management will start to occur with smart meters and better-educated consumers caring more about energy consumption. Eventually, CES units might communicate directly with meters in each home and advise customers of any abnormal condition in their local network and provide a recommended action in their own use of power.

Controlling Power on the Edge

The CES concept is only possible because of tremendous advancements in remote-control capability coupled with newer power electronics and advanced battery technologies. Utilities are accustomed to managing vast networks with many electrical distribution boxes installed in thousands of uncontrolled locations next to end users. In a typical utility grid, the supervisory control and data acquisition (SCADA) control devices stop at the substation and few devices beyond that point are monitored from the central control facility. Optimizing the performance of many CES units requires new control and communications techniques.

Figure 3 depicts how a local area network of CES units will be integrated into the grid. Functionally, these units will communicate by radio, and their performance will be controlled by the utility. Their combined outputs can be aggregated into the utility’s advanced metering infrastructure (AMI) or directly from the local SCADA control at the nearest substation. In this fashion, 80 CES units distributed in a local grid could provide the same functionality as the 2-MW substation battery shown in Figure 1. The CES approach would provide a more effective solution by relieving overloads in the branch feeders and provide better protection from outage, including the ability to communicate specific locations of customer outages, which would minimize service crew response time.


Continual improvement in lower-cost, wide-area communicating will help make the deployment of thousands of CES units possible. Another potential benefit that should help is that CES battery technology is almost identical in power range to the batteries being deployed in PHEVs. Mass production of batteries will lower the cost for both applications.

The CES concept will be tested extensively in 2010 and 2011. The DOE energy storage and smart grid demonstration stimulus contain two projects that should deploy more than 200 CES units in the next two years. A small demonstration project in Australia has been initiated as well, plus numerous utilities worldwide have expressed interest in the CES concept as a part of smart grid development. Taking control of utility power to the edge of the grid is the next logical step.
Posted by Unknown at 12:02 PM