The U.S. Department of Energy is accepting applications for a total of up to $74 million to support the research and development of clean, reliable fuel cells for stationary and transportation applications. Hydrogen systems can serve as viable energy storage options.

The solicitations include up to $65 million over three years to fund continued research and development (R&D) on fuel cell components, such as catalysts and membrane electrode assemblies, with the goal of reducing costs, improving durability and increasing the efficiency of fuel cell systems.

The funding also includes up to $9 million to conduct independent cost analyses that will assess the progress of the technology under current research initiatives and help guide future fuel cell and hydrogen storage R&D efforts. These awards will help support U.S. leadership in the emerging global fuel cell market, while limiting greenhouse gas emissions and reducing the country’s reliance on fossil fuels. 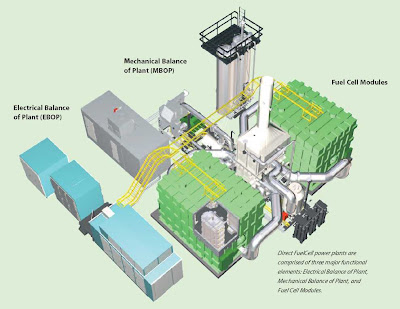 Fuel cells use the chemical energy of hydrogen or other fuels to cleanly and efficiently produce electricity or heat with minimal byproducts, primarily water. They can produce power in large stationary systems such as buildings or for vehicles such as commercial forklifts, buses and automobiles.

The Department will be funding research and development initiatives related to fuel cell system balance-of-plant components, fuel processors, and fuel cell stack components such as catalysts and membranes, as well as innovative concepts for both low and high temperature systems to help meet commercial viability targets in terms of cost and performance. Applicants will likely include teams of university, industry and national laboratory participants.

The cost analysis funding opportunity will help to determine the economic viability and technical progress of fuel cell and hydrogen technologies for stationary, transportation, and emerging market applications, including light duty vehicles, forklifts, buses and stationary power plants, as well as hydrogen storage systems. Under the program, the grantees will be expected to conduct life cycle cost analyses for different manufacturing volumes to help gauge the near-term, low-volume market viability for these technologies, along with their long-term potential.

The Fuel Cell Technologies Program has a comprehensive portfolio of activities that address the full range of barriers facing the development and deployment of hydrogen and fuel cells with the ultimate goals of decreasing our dependence on oil, reducing carbon emissions, and enabling clean, reliable power generation.

In a related story, The International Partnership for Hydrogen and Fuel Cells in the Economy (IPHE), with support from the U.S. Department of Energy's (DOE) Fuel Cell Technologies Program, recently released the 2010 Hydrogen and Fuel Cell Global Commercialization Development Update report. This document outlines the role hydrogen and fuel cells can play in a portfolio of technology options available to address the energy-related challenges faced by nations around the world. It offers examples of real-world hydrogen and fuel cell applications and the progress of the technologies, including government policies that increase technology development and commercialization.

The members of IPHE have been coordinating activities since 2003 to accelerate the adoption of hydrogen and fuel cell technologies into the global economy. Four priority focus areas of the IPHE are: 1) accelerating the market penetration and early adoption of hydrogen and fuel cell technologies and their supporting infrastructure; 2) policy and regulatory actions to support widespread deployment; 3) raising the profile with policy-makers and the public; and 4) monitoring hydrogen, fuel cell and complementary technology developments.

The report notes that several fuel-cell based energy storage projects are underway. As covered in an earlier post, a partnership in Canada between the Federal Government, BC Hydro, Powertech, and G.E. is converting excess off-peak electricity and storing as hydrogen via an electrolyser, resulting in an estimated decrease in Bella Coola, B.C.’s diesel consumption by 200,000 L/year and 600 tons of GHGs/year.

In Russia, a pilot project called “Ikebana” is using hydrogen for energy storage and aims to improve efficiency of power generation with a variety of power sources including renewable energy.

In Germany, there are several projects underway using hydrogen as an energy storage medium.

In essence, fuel cells are electrochemical devices that combine fuel with oxygen from the ambient air to produce electricity and heat, as well as water.The non-combustion, electrochemical process is a direct form of fuel-to-energy conversion, and is much more efficient than conventional heat engine approaches. CO2 is reduced, due to the high efficiency of the fuel cell, and the absence of combustion avoids the production of NOx and particulate pollutants.

Fuel cells incorporate an anode and a cathode, with an electrolyte in between, similar to a battery.The material used for the electrolyte and the design of the supporting structure determine the type and performance of the fuel cell. 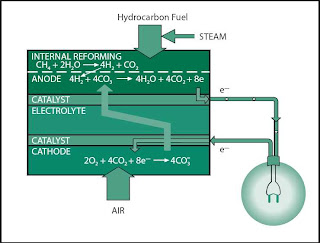 Fuel and air reactions for the molten carbonate Direct FuelCell occur at the anode and cathode, which are porous nickel (Ni) catalysts.The cathode side receives oxygen from the surrounding air. As can be seen in Figure 1, hydrogen is created in the fuel cell stack through a reforming process, which produces hydrogen from the reforming reaction between the hydrocarbon fuel and water. The gas is then
consumed electrochemically in a reaction with carbonate electrolyte ions that produces water and electrons.

The electrons flow through an external circuit to provide the power to the fuel cell load, and then return to be consumed in the cathode electrochemical reaction. The O2 supplied to the cathode, along with CO2 recycled from the anode side, reacts with the electrons to produce carbonate ions that pass through the electrolyte to support the anode reaction.The electron flow through the external circuit produces the desired power (DC current). An inverter is used to convert the DC output to AC.
Posted by Unknown at 10:35 AM