Solar energy zones on public lands in six western states have been identified by the U.S. government, based on their suitability for environmentally sound, utility-scale solar energy production. In a teleconference, Secretary of the Interior Ken Salazar said the plan is to not exceed 24,000 MW of utility-scale PV energy. The announcement does not specifically call out plans for energy storage, or other aspects of a solar installation, such as tranmission lines, but increasingly large scale energy storage systems (ESS) such as NaS or Li-Ion batteries are being coupled with PV.

The detailed study, known as the Draft Solar Programmatic Environmental Impact Statement, was compiled over the past two years as part of the Obama Administration’s efforts to create a framework for developing renewable energy in the right way and in the right places. The public is encouraged to provide comment on the draft plan during the next 90 days.

“This proposal lays out the next phase of President Obama’s strategy for rapid and responsible development of renewable energy on America’s public lands,” Secretary Salazar said. “This analysis will help renewable energy companies and federal agencies focus development on areas of our public lands that are best suited for large-scale solar development. Our early, ‘Smart from the Start,’ planning will help us site solar projects in the right places, and reduce conflicts and delays at later stages of the development process.”

“Our country has incredible renewable resources, innovative entrepreneurs, a skilled workforce, and manufacturing know-how,” said Energy Secretary Steven Chu. “It’s time to harness these resources and lead in the global clean energy economy. Today’s announcement is part of an integrated strategy to cultivate the entire innovation chain to create the jobs of the 21st century economy and to put America on a sustainable energy path.”

The Draft Solar Programmatic Environmental Impact Statement (PEIS) assessed the environmental, social, and economic impacts associated with solar energy development on Bureau of Land Management (BLM) administered areas in Arizona, California, Colorado, Nevada, New Mexico, and Utah. The Notice of Availability for the Draft Solar PEIS will be published in the Federal Register on Friday, December 17, 2010 and is available today in the Reading Room. The 90-day public comment period will include 14 open meetings, beginning in Washington, D.C. on February 2, 2011. 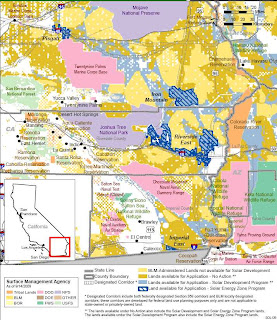 Caption: The U.S. government has identified public lands suitable for solar energy development, such as these areas in Southern California marked with horizontal blue bars.

Under the study’s Preferred Alternative, the BLM would establish a new Solar Energy Program that would standardize and streamline the authorization process and establish mandatory design features for solar energy development on BLM lands.

Under this proposal, the BLM would establish Solar Energy Zones (SEZ’s) within the lands available for solar development right of way applications. These are areas that have been identified as most appropriate for development, containing the highest solar energy potential and fewest environmental and resource conflicts. The Solar Energy Zones would provide directed, landscape-scale planning for future solar projects and allow for a more efficient permitting and siting process.

The initiative stems from Salazar’s June 2009 announcement that tracts of BLM land in the six western states, known as Solar Energy Study Areas, would be fully evaluated for their environmental and resource suitability for large-scale solar energy production.

The BLM manages about 120 million acres of public land in the six western states covered by the Draft Solar PEIS. BLM lands that would be excluded from solar energy production include areas currently off-limits to this type of energy development; those prohibited by law, regulation, Presidential proclamation, or executive order; lands with slopes of 5 percent or greater and/or sunlight levels below 6.5 kilowatt-hours per square meter per day; and areas with known resources, resource uses, or special designations identified in local land use plans that are incompatible with solar energy development.

On the basis of these exclusions, about 22 million acres of BLM-administered lands would be available for right of way applications for solar development under the Preferred Alternative. That includes about 677,400 acres identified as proposed Solar Energy Zones. However, reasonably foreseeable solar energy development is anticipated on only about 214,000 acres of the suitable and appropriate BLM lands.

As it completes the Solar PEIS, the BLM continues to process existing solar energy applications. Eight utility-scale solar projects have been approved in the last three months through the Department’s ‘fast-track initiative’ for BLM lands in California and Nevada that, combined, will generate 3,572 megawatts of electricity. The BLM’s current solar energy caseload includes 104 active solar applications covering 1 million acres that developers estimate could generate 60,000 megawatts of electricity.

The Department of Energy (DOE) is working to advance technological development and encourage the full-scale commercialization of clean energy technologies. Through the Loan Guarantee Program, DOE has made significant investments in utility-scale solar generation that will help to scale these technologies in the marketplace. Meanwhile, DOE's solar research and development efforts focus on significant improvements to the cost, reliability, and performance of devices, components, and systems. By working with DOI to accelerate solar energy generation on public lands, DOE is working to create a clean energy future while significantly reducing green house gases
Posted by Unknown at 10:25 AM