This article, by Andrew Lee, was originally published in the September 2010 issue of Renewable Energy World magazine. It is reprinted with permission.

The Holy Grail, the final piece in the renewable energy jigsaw, an unnecessary luxury - energy storage has been described as all of these in relation to large-scale renewables' penetration.

Storage that can be deployed at multi-MW scale is knocking on the door of the power industry and announcing its ability to, among other virtues, help deal with wind's intermittency, integrate renewables more smoothly into the grid, store renewable energy for sale at peak times and compensate for creaking power networks.

An array of technologies including compressed air, multiple species of batteries, flywheels and the use of molten salt with CSP plants may all have a part to play, and an old favourite, pumped hydropower, certainly will. But what part, and to what extent, is still not clear. What is not in doubt is that storage is firmly on the agenda, especially in the U.S.

The U.S. government has committed significant funds to help develop various storage technologies via its economic stimulus programme and Congress is looking at the possibility of offering incentives to grid-deployed storage.

In California, a bill working its way through the state legislature would require utilities to develop procurement programmes for energy storage systems to be achieved by the end of 2015, with an additional target at the end of 2020.

The California Energy Storage Alliance (CESA), an association of companies involved in developing storage technologies and systems, was predictably delighted when the state's assembly passed the legislation in June. "This landmark bill puts California at the forefront of a growing global market that will spur economic development," said CESA director Janice Lin.

Utility-scale Storage Set to Total 150 GW by 2015
That growth will be in the order of 22 GW of utility-scale energy storage worldwide by 2015, according to 'Renewable Energy Storage', a study by ABI Research released in May. ABI forecasts that by then, 150 GW of large-scale storage will be in place thanks to government incentives, increased performance through technical advances and declining costs of production.

Larry Fisher, research director at ABI, said he expects renewables to be the focus of much of the growth. "A good deal of utility-scale energy storage will be associated with renewable energy sources to compensate for their intermittency," said Fisher. "In the context of wind, we found Compressed Air Energy Storage well-suited for use on wind farms, as developments can be sited in places with appropriate geographic features to enable CAES. We forecast CAES will grow to nearly 1.6 GW globally by 2015." 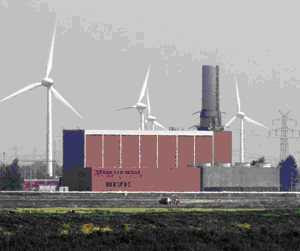 Caption: The 290 MW Huntorf CAES station in Germany was commissioned in 1978.

While most of the noise surrounding storage is coming from the U.S., Fisher pointed out that the Asia-Pacific region, and particularly China, Japan and Korea, has seen heavy investment in battery technologies. "Those and other Asia-Pacific nations have aggressive renewable energy goals. Combined with government support, it appears likely the region will comprise the greatest share of global utility-scale energy storage, at least over the next five years."

Fisher expects batteries to play a key role at utility level, not least because of the huge amount of development going into systems for hybrid and electric vehicles. He also pointed to work on molten salt energy storage for solar thermal generation as a technology likely to see greater use in the future.

ABI's study is the latest to predict a significant role for bulk energy storage in helping to integrate renewables, and particularly wind power.

U.S. Eyes Storage to Tackle its Transmission Issue
The advantage most often cited, as referred by Fisher, is storage's potential to compensate for intermittency in renewable generation levels.
According to Cian McLeavey-Reville, analyst at Delta Energy and Environment in Edinburgh, Scotland, a complete list of the potential benefits of storage could run to more than 100 items. Thus far, however, he believes much of the activity, particularly in North America, has boiled down to a single issue - compensating for the deficiencies in the transmission and distribution grid. "In the US in particular they are worried about the integration of large, concentrated areas of wind production. It's not so much an intermittency issue as a transmission issue."

McLeavey-Reville said the combination of new large-scale power production in remote areas and an ageing grid will inevitably put strain on the system in specific areas. Storing what the grid cannot handle looks like an attractive option, at least in the short term, given the massive costs of upgrading the transmission system.
With the exception of pumped hydro developments in countries such as Spain and Scotland, storage has yet to gather the same pace in Europe as it has in Japan and the US.

European pioneers of renewables generation such as Denmark have tended to boast robust networks with the ability to handle what wind and other resources can throw at them. "It's fair to say the storage industry has struggled slightly to find a foothold here [in Europe]," said McLeavey-Reville. "Any storage technologies that are being developed here are tending to focus on the North American market at the moment, because there's so much money floating around there. The fundamental drivers for storage just aren't as strong as in America."

That is not to say there is no European activity in the storage arena. In August, for example, the UK Energy Technologies Institute announced a technology demonstrator programme to develop a storage device capable of delivering a minimum of 500 kW on an 11 kV distribution network for around four hours. This would be enough to keep 400 homes powered for four hours, said the ETI, and would be used as a reserve to compensate for down-periods in renewable generation.

Delta Energy and Environment expects the continent's energy sector to take a much stronger interest in storage over the next few years. Indeed, it goes as far as predicting that what is currently a "very poor third behind Japan and the U.S." will become a "hotbed of storage activity".

The falling cost of storage technologies and the concentration of ever-larger renewable resources in far-flung areas of Europe are among the factors expected to drive activity. But, while its momentum is undeniable, the case for bulk energy storage as a key imperative for renewables integration is far from universally accepted.

Wind Industry Fears Extra Costs of Storage
There is unease in the wind power industry, for example, at the suggestion that wind inevitably needs storage to make it viable at high levels of market penetration, with the associated costs this would add.

An alternative school of thought sees storage as a "nice-to-have" rather than a "must-have", and points to other, cheaper weapons in the power system's arsenal such as more sophisticated use of flexible generators such as hydropower, better wind and solar forecasting, and greater use of demand response mechanisms.
The American Wind Energy Association (AWEA), for example, hailed the findings of a recent study by the U.S. National Renewable Energy Laboratory (NREL) that looked at scenarios for integrating up to 35% renewables into the electricity network of the western U.S.

NREL's 'Western Wind and Solar Integration Study' concluded that 30% wind and 5% solar penetration was technically feasible and economic without the use of storage, provided other measures are put in place, including improvements to the transmission system. The cost of these improvements would be small compared to the overall benefits of the new wind power, AWEA claimed. While conceding potential long-term benefits of storage to complete power networks as costs come down, AWEA characterises it as "useful, but rarely essential" for wind at present.
On the other side of the coin, a study prepared for the California Energy Commission by KEMA points to the very immediate advantages of storing renewable energy, for example from its potential to cut reliance on conventional assets for balancing the system, contributing to an overall lower emissions power economy.

The debate will continue, but the money and political support flowing towards large-scale storage suggest its hour is at hand.
Posted by Unknown at 11:20 AM