Mexico President Calderon announced today at COP16/CMP6, the United Nations Climate Change Conference, his intention to support a project by Rubenius, a Dubai-based alternative energy and smart grid enabler, to provide energy storage to enable use of renewable energy and manage the power grid more efficiently.

“Energy storage is the intelligent way to make renewable energy carbon free. Currently renewables require some sort of backup power -- for example: when the wind stops blowing, the most common solution today is carbon based backup systems. Energy storage can end this quandary,” stated President Calderon. 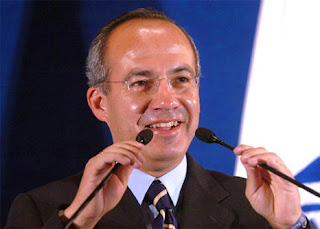 The President met with Claus Rubenius, chairman of Rubenius, at COP16/CMP6. The two had an in-depth discussion of renewable storage in North America and other locations.

“It is only fitting that we set a timetable for eliminating barriers to enable Mexico and our neighboring countries to accelerate renewable energy efforts at COP16/CMP6,” said President Calderon.

Rubenius bought 140 hectares (346 acres) of land in Baja California, Mexico, and will install 1,000 MWs (1GW) of sodium sulphide (NaS) energy storage batteries -- at a cost of over $4 billion. Rubenius will offer the storage space to energy firms and utilities in both countries, making deployment of wind and solar energy more viable.
The site, at the border of Mexico and San Diego, is the Silicon Border science park. It was developed for manufacturing high tech products in Mexicali, Mexico, and picked for its existing infrastructure and close proximity to both the Baja California power grid and parts of the US grid, including the new Sunrise Power Grid expansion. Silicon Border caters to the needs of the renewable energy sector, including smart grid, wind and solar firms looking for factory sites and energy generation sites.

In addition to the energy storage site and future manufacturing in Mexico, Rubenius will establish an R&D center in San Diego, and it will include labs for smart grid products and services.

Rubenius, the recently created parent of Amplex, incorporated in Denmark in 2001. In the UAE, the Amplex Group has installed what the firm called the largest energy storage system in the world.

In addition to the world’s first energy warehouse, today Rubenius also announced his intentions to pursue energy storage manufacturing operations. The new factory will also be based in Silicon Border; Baja California creating an additional 1,000 green jobs there.

Rubenius said it will also offer its products and expertise for off grid Communities. Nearly 3.5 billion people do not have access to a reliable electrical grid and clean water. Mexico will initiate several beta sites where off-grid communities are provided with either solar or wind power, power storage and water treatment at rates near what people on the grid are paying in the long run. Runebius has solutions now; President Calderon expressed interest in trying this technology in one or two communities.

“Our experience in the UAE and our smart grid expertise has given us the confidence to enter into the North American market with a 1 GW energy storage project in Silicon Border’s science park in Mexicali, Baja California,” said Rubenius. “The Mexican operation will house the storage devices and we will have offices in San Diego, California for research and development. The locations enable us to address both Mexico and the U.S.” The storage warehouse will require an investment of more than $4 billion, over the next 5 to 7 years.
Posted by Unknown at 11:13 AM