Energy Storage in Utah: Is CAES the Answer?

An environmental group in Utah called HEAL Utah (Healthy Environment ALliance of Utah) issued a report earlier this week titled "eUtah: A Renewable Energy Roadmap". The study, which was written by Arjun Makhijani, Ph.D, was commissioned by HEAL Utah. Arjun Makhijani is President of the Institute for Energy and Environmental Research in Takoma Park, Maryland.

The study calls for the use of compressed air energy storage (CAES) as a means of mitigating the inherent intermittency of renewable energy sources such as solar/photovoltaics, solar thermal and wind energy. It was nicely summarized in a report in the New York Times by Matthew Wald "Imagining a Renewable Utah" and a follow-up piece in the Huffington Post "A Green Energy Plan for the Red Heart of the American West."

The HEAL Utah report notes that PacifiCorp’s additions to wind capacity in the 2009 to 2020 period are planned to total more than 1,000 MW in its East sector, which includes Utah and Wyoming. "Yet it appears to have no active plans to develop compressed air energy storage, Makhijani notes. "Such storage could convert its intermittent wind capacity into a dispatchable resource of several hundred megawatts. Since compressed air energy storage is the most economical large-scale storage in the Utah context, it is very important to identify sites, estimate their cost and environmental impact, and conduct economic reviews of their location relative to other future elements in the electricity system, including transmission lines and solar and wind generating facilities." 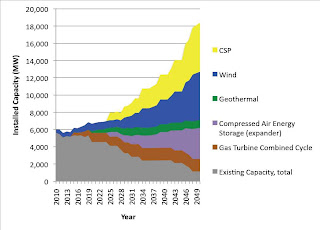