Construction of a fuel cell with enough capacity to power 2,800 homes has begun on the UC San Diego campus as part of a renewable energy project with the city of San Diego and BioFuels Energy to turn waste methane gas from the Point Loma Wastewater Treatment Plant directly into electricity without combustion. The university also plans to add an energy storage system, an electric vehicle (EV) charging station and a second chiller plant.

When completed in late 2011, the 2.8-megawatt fuel cell will be the largest on any college campus, providing about 8 percent of UC San Diego's total energy needs. The $19 million project requires no university funding: The project is eligible for $7.65 million in California Self Generation Program incentives; BioFuels Energy will provide the remaining $11.35 million in private investment, loans and investment tax credits. 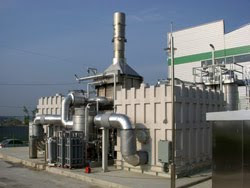 "Our campus currently generates 85 percent of its own power. With this new fuel cell and the near-doubling of our photovoltaic solar capacity in 2011, our campus will be able to meet as much as 95 percent of our annual electricity needs," said Gary C. Matthews, vice chancellor of resource management and planning. "The fact that we've been able to significantly increase our renewable-energy capacity in very challenging economic times with an innovative public-private partnership is as much a financial feat as it is an engineering accomplishment."

As part of a 10-year agreement, UC San Diego will buy the electricity produced by the fuel cell from BioFuels Energy at competitive rates. The university's fuel cell also offers the potential benefits of cogeneration, or combined heat and power, in which waste heat can be tapped as a secondary power source, raising the overall net efficiency of the fuel cell to about 60 percent, compared with about 33 percent for coal- and oil-fired power plants.

About 85 percent of the university's energy needs are provided by its low-emission 30-megawatt natural-gas-fired cogeneration plant, which operates at 66 percent overall net efficiency. It is also called a combined heat and power plant because it generates electricity to run lights and equipment and also captures the plant's waste heat to produce steam for heating, ventilation and air conditioning for much of the 12.5 million gross square feet of campus buildings. Waste heat from the plant also is used as a power source for a water chiller that fills a 3.8-million-gallon storage tank at night with cold water, which allows the university to reduce its peak daytime energy requirements by about 14 percent.

The fuel cell and its ancillary equipment will occupy a space about the size of a tennis court. It will form the centerpiece of UC San Diego's Energy Innovation Park on the east side of the main campus, which includes:

In the future the energy park will have an array of additional technologies:

The planned energy-storage system is eligible for an additional $3.4 million in Self Generation Program incentives and could reduce UC San Diego's peak energy demand by 6 percent.

"The university's increasingly sophisticated microgrid will integrate all the campus' production, consumption and stored power and cooling water into one of the most sophisticated energy-management systems anywhere," said John Dilliott, energy and utilities manager for the campus. "We will soon be able to factor in the variable cost of imported electricity and optimize the production and consumption of electricity in our entire system with a high degree of cost and energy efficiency."

The city of San Diego will make money by selling the Point Loma Wastewater Treatment Plant's biogas, which is purified on site and injected into an existing gas pipeline that will supply three fuel cells being constructed, one at UC San Diego and two at city of San Diego sites. "This project and the uniqueness of the concept is anticipated to pave the way for similar future applications," said Frank Mazanec, managing director of Encinitas, Calif.-based BioFuels Energy.

The three fuel cells are made by Danbury, Conn.-based FuelCell Energy, Inc. and use an electrochemical process to combine the methane fuel with oxygen in ambient air to produce electricity directly. Carbon dioxide and water vapor are also produced, but no nitrate or particulate pollutants are produced because there is no combustion.

The so-called directed biogas project is the first time that a FuelCell Energy power plant will be fueled by renewable biogas generated at a distant location.

The fuel cell being built at UC San Diego is one of the largest fuel cells in the nation to use directed biogas from a wastewater treatment plant," said Kenneth J. Frisbie, also managing director at BioFuels Energy. "No university has a fuel cell this big."
Posted by Unknown at 9:29 AM