Construction on a compressed-air energy storage (CAES) project named ADELE will begin in 2013 in Staßfurt, a city in Sachsen-Anhalt, Germany (ADELE stands for the German acronym for adiabatic compressed air energy storage for electricity supply). The project is a joint effort between RWE, General Electric, Zueblin, and the German Aerospace Center. The German Federal Ministry of Economics is also providing state funding. Altogether, the project members will contribute an amount of EUR 10 million ($USD 13.2 million). Like pumped-hydro and NaS batteries, CAES is seen as a way to store large amounts of energy. The project was announced earlier this year, but a location and not yet been determined.

With CAES, air is compressed during periods when electricity supply exceeds the demand; the resulting heat will be buffered in a thermal energy storage, and air will be pressed into underground caverns. When electricity demand increases later on, this compressed air can then be used to generate power in a turbine.


The demo plant will have a storage capacity of one billion watt-hours (GWh) and generate electrical power of up to 200 megawatt. That way ADELE will be able to provide backup capacity within a very short time and replace forty state-of-the-art wind turbines for a period of five hours.

According to a press release, during the compression process, the temperature of the air will play a decisive role since it rises to more than 600°C – thus making high demands on the compressor technology. GE is producing a preliminary aerodynamic design and the preliminary mechanical compressor design. To ensure that the resulting heat will not be lost, it will be extracted from the compressed air, before the air is stored, and absorbed by thermal energy storage. The heat storage facilities are up to 40m high containers with beds of stones or ceramic bricks through which the hot air flows. As soon as power is to be generated and before the air will be able to drive a turbine, the cold, compressed air must be heated again by the thermal energy storage. This adiabatic approach whereby the heat of the compressed air is not lost but remains in the process and can be used for power generation differs from existing compressed-air reservoirs primarily by its significantly higher levels of efficiency. Furthermore, the compressed air will not be heated by means of natural gas – thus avoiding CO2 emissions.

"The development of a powerful heat accumulator featuring a very high internal pressure and an operating temperature of more than 600 degree Celsius confronts us with completely new challenges with respect to the design of the pressure chamber and the development of suitable storage materials," explained Joern Beckmann, Chief Executive Officer of Zueblin. "Such a task can only be solved by a breakthrough innovation because the thermal energy storage will be subject to stresses resulting from the cyclic temperature and pressure loads, which are much higher than usual",

Prof. Dr. Johann-Dietrich Woerner, Chairman of the Board of DLR, added: "Within the framework of the ADELE project, we will develop solutions for the conception, design, layout, and dimensioning of storage equipment and high-temperature insulation, which are core components and of decisive importance for the performance and cost efficiency of the overall structure."

Suitable locations for compressed-air storage power plants are, in particular, regions with adequate geological salt structures, which can then be used to build underground caverns for the absorption of large quantities of compressed air. In addition, such salt structures should be close to wind turbines. Staßfurt is such a location.

Concerning the selection of the location, Erdgasspeicher Kalle GmbH, a subsidiary of the RWE group, will contribute its know-how for the planning, installation, and operation of underground storage facilities.

General Electric‘s engineers are working to adapt turbine technology to meet the special requirements of the adiabatic CAES power plant. The pressures to be expected, for example, far exceed the inlet pressures of today‘s gas turbines. Moreover, the turbine must cope with the considerable fluctuations in pressures and throughput amounts when the storage facility is discharged. 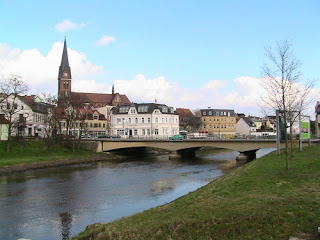 Caption: Staßfurt, Germany, which is about halfway between Berlin and Hannover.
Posted by Unknown at 11:42 AM