In a speech at the National Press Club, U.S. Energy Secretary Stephen Chu highlighted an electric vehicle battery technology being developed by Fluidic Energy and Arizona State University that could enable cars to be driven 500 miles on a single charge. Fluidic Energy, a spinoff from ASU founded by Professor Cody Friesen, recieved $5.13 million in DoE funding in 2009. 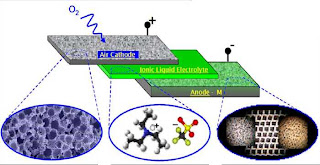 Fluidic and ASU are working on a Metal-Air Ionic Liquid (MAIL) battery technology that is designed to be measurably safe, earth-abundant and geo-politically sustainable, while also delivering ultra-high energy density at a low cost. MAIL batteries offer a high level of safety because the oxidant and reductant are not stored in the same space. In the event of a crash involving an electric vehicle, the risk of catastrophic energy release and fire is non-existent. The MAIL Battery will have a minimum energy density of 4-11 times that of Li-ion, and a long-term cycle life goal of 2600 cycles (according to the DoE website).

The new generation of “metal-air” batteries can store many times more energy than standard lithium-ion batteries. Metal-air batteries contain high energy metals and literally breathe oxygen from the air, giving them the ability to store extreme amounts of energy. To date, the development of these batteries has been blocked by the limitations of using unstable water based solutions that break down and evaporate out of the battery as it breathes. Fluidic Energy’s approach involves ionic liquids – extremely stable salts in liquid form -- using no water at all.

According to a previously published report, ionic liquids (also known as ionic fluids, liquid salts, and liquid electrolytes) don’t evaporate like water because they are formed from salts which remain liquid at room temperature. This includes sodium chloride and potassium nitrate that, when heated, melt and undergo a phase change into a liquid comprised almost entirely of ions. Such batteries could also offer better electrochemical stability (of up to 5 volts, compared to water’s 1.23 volts per cell), which means they could use metallic materials that have a greater energy density than zinc.

Chu also took the opportunity to suggest that the energy race was resulting in a "new Sputnik" moment, comparing concern over China's emerging prowess in energy to the alarm caused by the Soviet Union's Sputnik satellite flying over the U.S. in the '50s -- but that seems to be a bit of a stretch. China still has a long way to go in terms of its energy policies.
Posted by Unknown at 1:35 PM