EnerG2 Focused on Electrodes for Ultracapacitors

EnerG2 is focused on customizing electrode materials to enhance energy and power density in ultracapacitors. The company is using nano-structured materials to optimize the electrodes' surface area, which they say will help performance and cycle life. A good story today at REW.com on supercapacitor-electrode-maker ENERG2, titled " The Story of an Energy Storage Startup." 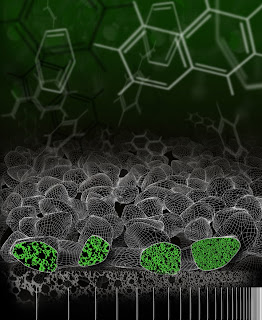 In August, EnerG2 broke ground on what they claim to be the world’s first facility dedicated to the commercial-scale production of synthetic high-performance carbon electrode material. The plant was made possible by a $21.3 million Federal stimulus grant allocated by the US Department of Energy for makers of advanced automotive batteries and energy storage technologies. EnerG2 will partner with Albany-based Oregon Freeze Dry, Inc. (OFD).

In addition to the federal stimulus funding, EnerG2 since inception seven years ago has raised over $14.5 million in equity financing. Institutional investors OVP and Firelake led a Series A financing and additional strategic investors added new equity funding in April of this year.

Caption: EnerG2's carbons demonstrate a spectrum of pore size distributions and surface morphologies. The technology is based on molecular self-assembly and produces nano-structured carbon materials that are finely controlled and offer ultra-high surface areas.

The company uses nano-structured carbon materials that are finely controlled and offer ultra-high surface areas. These materials are extremely conductive and are tremendously attractive to energy-storing molecules such as electrolytic ions, methane, natural gas and hydrogen.

What's interesting is that it is exactly this kind of technology development that a DoE panel called for in 2007. In their findings, published in the Basic Research Needs for Electrical Energy Storage, the panel said the capability to synthesize nanostructured electrodes with tailored, high-surface-area architectures offers the potential for storing multiple charges at a single site, increasing charge density. The addition of surface functionalities could also contribute to high and reproducible charge storage capabilities, as well as rapid charge-discharge functions. They predicted that the design of new materials with tailored architectures optimized for effective capacitive charge storage will be catalyzed by new computational and analytical tools that can provide the needed foundation for the rational design of these multifunctional materials. "These tools will also provide the molecular-level insights required to establish the physical and chemical criteria for attaining higher voltages, higher ionic conductivity, and wide electrochemical and thermal stability in electrolytes," they said.

Ultracapacitors are a type of electrochemical capacitors (ECs), which differ from conventional dielectric and electrolytic capacitors in that they store far more energy. As energy storage devices, ECs have a number of potentially high-impact characteristics, such as fast charging (within seconds), reliability, large number of charge-discharge cycles (hundreds of thousands), and wide operating temperatures. Because of their very fast charging rate, ECs may be able to recover the energy from many repetitive processes (e.g., braking in cars or descending elevators) that is currently being wasted. Large-scale ECs can perform functions of a different kind, such as power quality regulation of the electrical grid, which can avoid the costly shutdown of industrial operations as a result of intermittent outages and power fluctuations.

While ECs are related to batteries, they use a different energy storage mechanism. Batteries move charged chemical species (ions) from one electrode via an electrolyte to the second electrode, where they interact chemically. Thus batteries store chemical energy. EDLCs store electrical charge physically, without
chemical reactions taking place. Because the charge is stored physically, with no chemical or phase changes taking place, the process is highly reversible and the discharge-charge cycle can be repeated virtually without limit. Typically, an EDLC stores electrical charge in an electrical double layer in an electrode-electrolyte interface of high surface area. Because of the high surface area and the extremely low thickness of the double layer, these devices can have extraordinarily high specific and volumetric capacitances. A striking dissimilarity between batteries and ECs is the number of charge-discharge cycles each can undergo before failure. The dimensional and phase changes occurring in battery electrodes represent one of the key limitations in attaining longer charge-discharge cycling. In contrast, no inherent physical or chemical changes occur in EC electrodes during cycling because the charge is stored electrostatically. As a result, ECs exhibit cycle lifetimes ranging from a few hundred thousand to over one million cycles. Most notably, however, ECs have the ability to deliver an order of magnitude more power than batteries.

Originally working in collaboration with the University of Washington Department of Materials Science & Engineering, EnerG2 has developed and commercialized unique sol-gel processing technologies to construct its carbon materials (from the EnerG2 website). Sol-gel processing, which creates optimal structure and purity in the finished carbon product, is a chemical synthesis that gels colloidal suspensions to form solids through heat and catalysts.

EnerG2 has invented a patented ability to control the hydrolysis and condensation reactions within the gelling process, allowing the materials' surface structures and pore-size distributions to be shaped, molded and customized. The company says it has developed these processing capabilities with an explicit and aggressive focus on cost control. To avoid the expensive processing typically associated with nanotechnology, the company has leveraged large-scale commercial processing technologies from established industries to design a production approach that is both relatively inexpensive and inherently scalable.

In addition to ultracapacitor electrodes, the company is targeting fuel cell and hydrogen storage applications.
Posted by Unknown at 7:20 AM