Microbatteries use Nanowires and PMMA Coating

Rice University researchers have moved a step closer to creating robust, three-dimensional microbatteries that would charge faster and hold other advantages over conventional lithium-ion batteries. They could power new generations of remote sensors, display screens, smart cards, flexible electronics and biomedical devices. Such energy storage devices are tiny but the developments made here could help advance batteries used for electric vehicles (EVs) and other applications.

The batteries employ vertical arrays of nickel-tin nanowires encased in PMMA. Rice researcher Pulickel Ajayan found a way to reliably coat single nanowires with a smooth layer of a PMMA-based gel electrolyte that insulates the wires from the counter electrode while allowing ions to pass through. 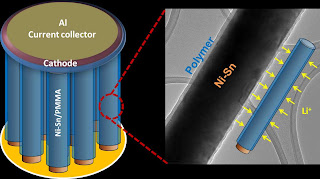 "In a battery, you have two electrodes separated by a thick barrier," said Ajayan, professor in mechanical engineering and materials science and of chemistry. "The challenge is to bring everything into close proximity so this electrochemistry becomes much more efficient."

Ajayan and his team feel they've done that by growing forests of coated nanowires -- millions of them on a fingernail-sized chip -- for scalable microdevices with greater surface area than conventional thin-film batteries. "You can't simply scale the thickness of a thin-film battery, because the lithium ion kinetics would become sluggish," Ajayan said.

"We wanted to figure out how the proposed 3-D designs of batteries can be built from the nanoscale up," said Sanketh Gowda, a graduate student in Ajayan's lab. "By increasing the height of the nanowires, we can increase the amount of energy stored while keeping the lithium ion diffusion distance constant."

The researchers, led by Gowda and postdoctoral researcher Arava Leela Mohana Reddy, worked for more than a year to refine the process.

Various three-dimensional (3D) battery architectures have been proposed to address effective power delivery in micro/nanoscale devices and for increasing the stored energy per electrode footprint area. One step toward obtaining 3D configurations in batteries is the formation of core−shell nanowires that combines electrode and electrolyte materials. One of the major challenges however in creating such architectures has been the coating of conformal thin nanolayers of polymer electrolytes around nanostructured electrodes. "To be fair, the 3-D concept has been around for a while," Reddy said. "The breakthrough here is the ability to put a conformal coat of PMMA on a nanowire over long distances. Even a small break in the coating would destroy it." He said the same approach is being tested on nanowire systems with higher capacities.

The process builds upon the lab's previous research to build coaxial nanowire cables that was reported in Nano Letters last year. In the new work, the researchers grew 10-micron-long nanowires via electrodeposition in the pores of an anodized alumina template. They then widened the pores with a simple chemical etching technique and drop-coated PMMA onto the array to give the nanowires an even casing from top to bottom. A chemical wash removed the template.

They have built one-centimeter square microbatteries that hold more energy and that charge faster than planar batteries of the same electrode length. "By going to 3-D, we're able to deliver more energy in the same footprint," Gowda said.

They feel the PMMA coating will increase the number of times a battery can be charged by stabilizing conditions between the nanowires and liquid electrolyte, which tend to break down over time.

The team is also studying how cycling affects nanowires that, like silicon electrodes, expand and contract as lithium ions come and go. Electron microscope images of nanowires taken after many charge/discharge cycles showed no breaks in the PMMA casing -- not even pinholes. This led the researchers to believe the coating withstands the volume expansion in the electrode, which could increase the batteries' lifespans.