Kathleen Davis, Senior Editor at POWERGRID International, reports on the evolution of virtual power plants, which could help distributed energy resources, such as energy storage, be incorporated and optimized.

The traditional vertically-integrated power utility may be supplanted in the future by distributed generation and various renewables, meaning that the classic linear structure of power could be replaced by a mixture of generation, transmission and distribution connections shaped much like a wagon wheel—with multiple spokes interconnected at one spot known as the virtual power plant. 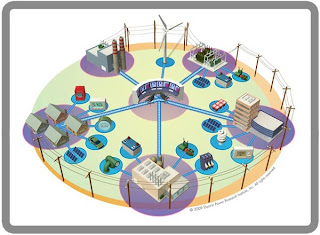 The concept of virtual power plants isn’t new. It’s an idea that’s been batted around since the first discussions of how to incorporate renewables and energy storage into the power mix. As the smart grid gains ground and the delivery side of the power industry gets sharper, however, the idea of being able to quickly pull in distributed power to the overall infrastructure plan doesn’t seem quite so impossible these days.

In reality, a virtual power plant (VPP) isn’t really a power plant at all. It doesn’t actually exist. It’s a power plant of the IT mind—a plant locked in the digital world that can shift from traditional generation to smart-grid-enabled renewables at will. The VPP exists only in the software used to manage the different options, a classic Oracle that knows the answers and can, additionally, dispatch solutions in electric form.

“A VPP is the aggregation of distributed resources that can be utilized in the same manner as conventional generation,” said Matt Wakefield, program manager for smart grid at the Electric Power Research Institute, which is currently working with American Electric Power (AEP) on a virtual power plant simulation project. “In many cases, the resources are negawatts, or load relief, but can also be other options. Ideally, the dispatch of the VPP would be fully integrated into utility system operations such that it would be transparent to the system operator.”


The Bits and Bytes of the VPP

Because the backbone of the VPP—the software programming holding the pieces together and directing their actions—is a virtual concept, an examination of the VPP is best started with the more tangible concept: distributed energy.

A general concept of distributed energy resources (DER) for Wakefield and EPRI includes many options: storage, demand response (DR), renewable generation and more traditional distributed generation. And, Wakefield sees these options becoming more important in the fight against greenhouse gas problems. “There is no silver bullet to reduce greenhouse gas (GHG),” Wakefield said. “A portfolio of solutions will be required, and integration of DER is a big piece of the smart grid portion of that portfolio.”

Add to the DER options the growing smart grid option, which involves a meeting of the IT and power engineering minds, and Wakefield sees new opportunities to integrate “these thousands or millions” of DERs into a virtual power plant. “The more effectively that’s accomplished in an interoperable fashion, the more important DER will be to achieve those goals,” he said.

As experts like Wakefield at EPRI began to examine the options that DER could provide, the question of transition still remains. Incorporating distributed energy is a big change from the one-line power structure the industry is used to. Wakefield admits that the transition has been a slow process, happening on only a small scale even today with demonstrations and simulations (like those within the EPRI Smart Grid Demonstration Project, including the AEP VPP).

As the industry moves beyond demonstrations and pilots, Wakefield sees the adoption of standardized communications as a key to creating a world where VPPs can exist in real-time.

“Unlike microgrids, utilities will have to play a major role in the evolution of the VPP market, by nature of their reliance upon the distribution (and possibly transmission) grid infrastructure, including smart meters and (increasingly) personalized billing service envelopes,” the authors wrote in the report summary.

Will the industry make it to a VPP world? While standardized communications might be up in the air at the moment, pilots and utility support are on the VPP horizon.

Europe’s progress with VPPs may be a step or two ahead of the U.S. For the last few years, the European Union has been testing the VPP concept with FENIX, a project meant to boost DER by showing how distributed energy can contribute to the power system. FENIX is making that point with large-scale virtual power plant and decentralized management demonstrations.

The project was organized in three phases, including analysis in two future scenarios, development of a layered communication and control solution (with recommendations on international power standards) and validation through field deployment. FENIX project leaders developed a general VPP architecture that could be adapted to any European country. They then ran two specific demonstrations for southern Europe in Spain and northern Europe in the UK, showing adaptations based on current products from vendors like AREVA and Siemens. In Addition, the DeMoTec laboratory [Design Centre for Modular Supply Technology] at Fraunhofer IWES was used to demonstrate ancillary services by DER units aggregated in a laboratory VPP under the FENIX project.

The final FENIX project book reported that the cost-benefit analysis was attractive to business stakeholders with distributed assets, any partners involved and the electricity sector at large. The book also noted, however, that this means “fierce competition” for large-scale traditional central generators who might not like the challenge to their market power.

While FENIX recently wrapped up in Europe, VPP demonstrations, including the EPRI project with AEP, are just beginning in the U.S.

The AEP VPP project is addressing a fully integrated and robust smart grid’s functionality and performance from end-use to regional transmission operator (RTO), according to EPRI’s recent report “EPRI Smart Grid Demonstration 2-Year Update.” The project involves lab research and several pilot locations. A South Bend, Ind., pilot includes 10,000 customers, smart meters, communications, end-use tariffs and controls, distribution automation and voltage control with robust modeling and simulation platforms. A larger and more comprehensive demonstration project involves 110,000 AEP customers in central Ohio that also adds community energy storage devices, energy management systems and other smart devices. The AEP project will develop technology models that will be applied to smart grid circuits and develop simulations of how these technologies will interact. These simulations can then be leveraged to become a VPP.

AEP’s VPP project is one of 18 projects under EPRI’s smart grid demonstration research. All the projects are designed to progress the smart grid. Wakefield doesn’t see a single strategy for the grid but believes if DER penetration keeps growing VPPs could play a significant role.

“We do not think there is a one size fits all strategy for improving our energy future. When you look at the overall power grid infrastructure, it is not likely to change significantly in the near term. We are seeing accelerated growth and promise of deploying DER,” he said. “The VPP will be important as one of the pieces of a whole portfolio of solutions to support the grid.”
Posted by Unknown at 7:08 AM