A $17.1 million loan guarantee has been finalized a 20MW energy storage installation at the AES Westover 119MW coal-fired stationl near Johnson City, New York. The loan guarantee, annaounced by Department of Energy Secretary Steven Chu, will support the construction of an energy storage system using advanced lithium-ion batteries, including those manufacturing by A123 Systems.

A year ago, AES (NYSE: AES) and A123 Systems (Nasdaq: AONE) joined forces on a similar project in Chile: A 12MW frequency regulation and spinning reserve project at AES Gener's Los Andes substation in the Atacama Desert of Chile. Goal of the was to help improve the reliability of the electric grid in Northern Chile. A123 Systems' Hybrid Ancillary Power Units (Hybrid-APU™), based on lithium-ion battery technology, were used. The Chile installation is shown on the right, below. Before that, a 2MW system was installed in California (show on left).

“The AES project helps reduce carbon emissions and strengthens our energy infrastructure by allowing for more renewable energy sources like solar and wind to contribute to the electrical grid,” said Secretary Chu. “Bringing more efficiency and reliability to the grid will help cut costs for consumers and power a cleaner energy future.” AES has been addressing emissions at the coal-fired plant for some years. In December 2006, AES announced the company would install emission-reducing technology on Unit 8 of the Westover station. Construction on the $50-million project began in early 2007 and was completed in 2008. AES installed a Selective Catalytic Reduction (SCR) system for a ninety percent reduction in nitrogen oxide (NOx) emissions. A dry scrubber and fabric filter bag-house was built to reduce sulfur dioxide (SO₂) emissions by ninety-five percent. AES expected mecury emissions would be reduced by ninety percent because of these additions.

The new AES energy storage technology can help reduce carbon emissions by 70 percent compared to frequency regulation provided by fossil energy suppliers. Traditionally, grid frequency regulation, which is needed to balance power generation and consumption on the grid, is maintained by burning additional fossil fuels at power plants. The AES project eliminates the need to burn fossil fuels and instead uses battery technology and new software that will provide the same regulation at a lower price. This advanced frequency regulation capability will allow renewable electricity generation to play a larger role in New York’s transmission network.

A123's Hybrid Ancillary Power Unit energy storage system can serve two functions. First, it will absorb (charge) energy from the grid during times when the frequency or voltage is too high and inject (discharge) that energy back to the grid when it is too low. A123's H-APU is expected to allow greater use of variable sources of energy such as wind and solar by rapidly absorbing or injecting energy as these sources vary. The H-APU is expected to provide variable service much faster than existing power plants responding in seconds rather than minutes. And, because it is recycling energy already in the system, it will provide these services without unnecessary emissions.

Second, the Hybrid Ancillary Power Units are designed to provide backup services by storing energy until it is needed by the grid in the event of a power plant or other asset failure. In some markets, the portion of thermal power plant capacity normally reserved for ancillary services to provide reserve capacity and frequency regulation services can be freed up to operate at a higher capacity and produce more electricity and associated revenue. 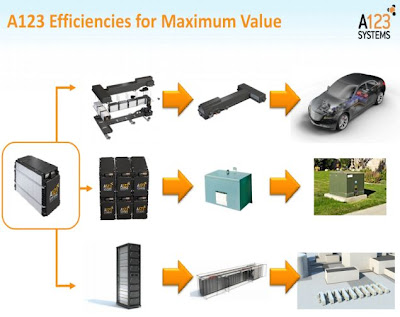