Clemson University physics professor Apparao Rao has received a $1.2 million grant from the National Science Foundation (NSF) to explore the use of carbon nanomaterials for energy storage.
“The global push for alternative and renewable energy sources is creating a need for materials and devices that can store energy for later use,” said Rao.

The Clemson physics professor will lead a team of researchers from Clemson and the University of California-San Diego in developing novel types of electrochemical capacitors with blueprints for their scalability.

Rao is regarded as a leader in developing nanomaterials and discovering how the laws of physics operate in a world of indescribable minuteness. At one-billionth of a meter, these materials have a much greater surface-to-volume ratio than other substances, which can lead to unusual and often very useful properties.

“Our ongoing work with nanomaterials points to advances in the electronics and energy storage industry,” said Rao. “This NSF project for energy storage could have a significant impact on applications ranging from household power tools to energy management and conservation applications.”
This project will build on previous research by Rao and his research associate, professor Ramakrishna Podila, which provided insight on engineering and characterizing defects in carbon nanomaterials, which is central to this project.

The researchers now aim to use carbon nanomaterials with chains of molecules that allow electric current to flow in high-energy storage devices superior to those available today.
“Discovering so many potential applications for nanomaterials makes every day in the lab an adventure,” said co-investigator Mark Roberts, a Clemson professor in chemical and biomolecular engineering. 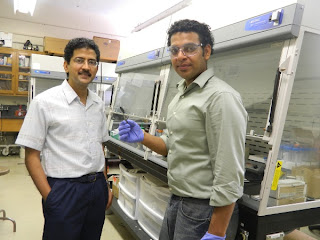 Apparao Rao, left, and Ramakrishna Podila are researching the use of carbon nanomaterials for energy storage. image by: Clemson University
Posted by Unknown at 8:02 AM 7 comments: