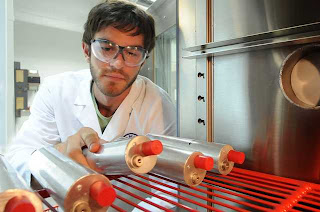 Argonne has developed and patented a sizable suite of Li-ion battery technologies with funding from DOE's Office of Energy Efficiency and Renewable Energy. Funding for the earlier stages of research and development of this technology was provided by DOE’s Office of Science.

LG Chem, Ltd. is Korea’s largest chemical and rechargeable battery maker in terms of both size and performance. LG Chem Michigan, Inc. (LGCMI) is a wholly-owned North American subsidiary of LG Chem. The company was established in 2010 to manufacture Lithium-ion battery cells at the $303 million production facility in Holland, Mich., that was funded in part by a grant from the U.S. Department of Energy.

One of Argonne’s patents in this area (7,790,308) issued in September 2010, describes an activated electrode for a non-aqueous electrochemical cell, having as a precursor a lithium metal oxide.
Posted by Unknown at 7:22 AM