Nano Breakthrough Could Lead to Electronic Textiles with Energy Storage 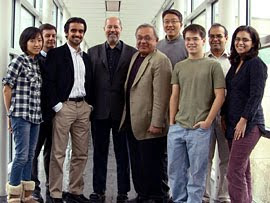 The researchers at the Alan G. MacDiarmid NanoTech Institute at UT Dallas have reported a new technology to embed large amounts of guest powders in nanofibers.

A tiny amount of host carbon nanotube web holds "guest" powders in the corridors of highly conducting scrolls, without altering their performance. With conventional technology, powders are either held together in a yarn using a polymer binder or incorporated on fiber surfaces. Both approaches can restrict powder concentration, powder accessibility for providing yarn functionality, or the strength needed for yarn processing into textiles and subsequent applications.

In the Jan. 7 issue of the journal Science, co-authors working in the Alan G. MacDiarmid NanoTech Institute of UT Dallas describe the use of “bi-scrolling” to solve these problems.

“In this study, we demonstrated the feasibility of using our bi-scrolled yarns for applications ranging from superconducting cables to electronic textiles, batteries and fuel cells,” said Dr. Ray H. Baughman, Robert A. Welch Professor of Chemistry and director of the UT Dallas NanoTech Institute.

Bi-scrolled yarns get their name from the way they are produced: A uniform layer of guest powder is placed on the surface of a carbon nanotube web. This two-layer stack is then twisted into a yarn.

The carbon nanotube webs used for bi-scrolling are not ordinary— they can be lighter than air and stronger pound-per-pound than steel. Four ounces of these webs would cover an acre of land and are about a thousand times thinner than a human hair.

These strong carbon nanotube webs hold together yarns that are mostly powders and can even be machine-washed. The web’s thinness means that hundreds of scroll layers can be included in a bi-scrolled yarn no thicker than a human hair.

The choice of imbedded powder determines yarn function. For instance:

“UT Dallas’s bi-scrolling technology is rich in application possibilities that go far beyond those we described in Science,” Baughman said. “For instance, our collaborator, professor Seon Jeong Kim of Hanyang University in Korea has already used bi-scrolled yarn to make improved biofuel cells that might eventually be used to power medical implants.”

“I am especially proud of two of our former NanoExplorer high school students, Carter Haines and Stephanie Stoughton, who are undergraduate co-authors of both our article in Science magazine and our internationally filed patent application on bi-scrolling,” Baughman added.