Ener1, Inc. (Nasdaq: HEV), a manufacturer of lithium-ion energy storage systems for transportation, utility grid and industrial electronics applications, announced the sale of $25 million of senior unsecured notes, together with shares of common stock and warrants.

Along with funds from an existing grant from the U.S. Department of Energy under the American Recovery and Reinvestment Act, Ener1 will use the proceeds from the sale primarily to continue building out production capacity in the U.S. and for working capital to support existing projects with customers in the grid energy storage and transportation sectors. In addition to its growing relationships with car makers THINK and Volvo, the company says it has made substantial progress with U.S. and international customers in the heavy-duty transportation market, a key company focus for 2011 and beyond.

"Ener1 is strategically scaling its global manufacturing capabilities to meet the demand for our recently announced customer programs, including a $40-million utility supply agreement with the Russian Federal Grid Company," said Chairman and CEO Charles Gassenheimer.

The initial phase of the project in Russia is scheduled for completion in Q2 this year. It focuses on grid integration of large-scale emergency power back-up systems in economically critical regions, specifically the Black Sea port city of Sochi, selected as the official site of the XXII Winter Olympic Games in 2014. Installations are being custom designed for remote grid substations in the Western Caucasus Mountains ski resort Krasnaya Polyana (shown). The purpose is to maximize reliability of the power supply for Olympic events. 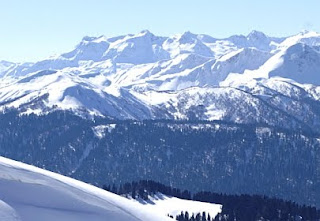 The supply contract was signed with state-run FGC's wholly owned subsidiary Mobile GTES, Russia's leading manufacturer of mobile electric power stations. In addition to the design and manufacture of the specialized Sochi energy storage units, the contract includes two in-depth joint studies involving Ener1 and FGC engineers covering: System-wide assessment for deployment of lithium-ion storage for applications including strengthening the grid in remote regions, peak load-shaving and future integration of intermittent renewable power sources such as wind;
Feasibility of localization within Russia of development and manufacture of lithium-ion battery cells and other components for energy storage systems.