SolarReserve, a U.S. developer of large-scale solar power projects, has closed financing for the 110 MW Crescent Dunes Solar Energy Project to be built near Tonopah, Nevada. The Crescent Dunes project will the nation's first commercial scale solar power tower with fully integrated energy storage, the largest of its kind in the world, according to the company (artist's rendition shown). 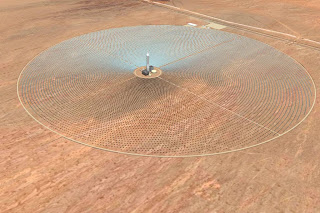 The project is being constructed on federal land operated by the Bureau of Land Management. In November 2010, Interior Secretary Salazar signed the project's thirty-year right-of-way and approval to construct. Construction commenced earlier in September and the project is expected to start operations in late 2013.

As part of the project financing, SolarReserve is joined as investors in the project by ACS Cobra, which is focused on the engineering and construction of power plants and thermal solar facilities, and the equity capital practice of Santander. The project also closed on $737 million in project debt along with a loan guarantee from the U.S. Department of Energy. ACS Cobra's Nevada-based affiliate, Cobra Thermosolar Plants Inc., will act as the general contractor utilizing Nevada and regional subcontractors to perform the work.
﻿ ﻿ The proposed facility will use concentrating solar power (CSP) technology, and be equipped with an integral storage system. The technology generates power from sunlight by focusing energy from a field of sun-tracking mirrors called heliostats onto a central receiver. Liquid salt, which flows similar to water when melted, is circulated through the receiver, collecting the energy gathered from the sun. The heated salt is then routed to an insulated storage tank where it is stored with minimal energy losses. When electricity is to be generated, the hot salt is routed to heat exchangers to produce steam used to generate electricity in a conventional steam turbine cycle. The salt is then sent to the cold salt storage tank, ready to be reheated by the sun and reused the following day. The salt storage technology was demonstrated successfully at the U.S. Department of Energy-sponsored 10-MW Solar Two project near Barstow, California.
Posted by Unknown at 12:03 PM