The nation's first solar storage facility that is fully integrated into a utility's power grid is now online.
The PNM Prosperity Energy Storage Project, located south of the Albuquerque International Sunport near Mesa Del Sol, can produce 500 kilowatts of power and uses high-tech batteries to create firm and dispatchable energy derived from a renewable energy source. It is the first of 16 smart grid projects partially funded by stimulus monies to be fully operational. 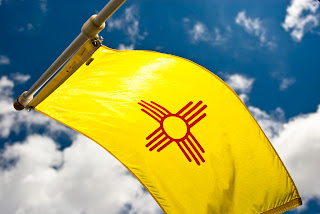 Using 2,158 solar panels, 1,280 advanced lead-acid batteries, smart grid technology and sophisticated metering and monitoring technology, the storage system can automatically smooth the output of the solar panels, making the renewable power more dependable. For example, when a cloud casts a shadow on the solar array, energy output immediately is reduced. The battery and smart grid system work in tandem to instantaneously dispatch energy to fill the gap created by the cloud. In addition, the system can store solar power -- or energy produced by other facilities connected to the PNM grid -- when demand is low. During times of peak customer use, the system then can dispatch the power back into the grid to support demand.

"While PNM has three solar facilities online and two more in the works, the batteries and technology supporting this project create a reliable solar energy resource and can produce power when the sun isn't shining," said Pat Vincent-Collawn, PNM president and CEO. "Without an energy storage component, renewable energy is a limited resource that needs to be backed up by traditional generation facilities. Although this technology is in its early integration stage and additional research and development is needed, the PNM Prosperity Energy Storage Project is a significant first step toward making renewable energy reliable energy."

U.S. Sen. Jeff Bingaman, who serves as chairs of the Senate Energy and Natural Resources Committee, U.S. Rep. Ben Ray Lujan, U.S. Department of Energy representatives and state and local officials are scheduled to speak during a dedication of the facility on Saturday, Sept. 24.

"New Mexico has great potential to be a top producer of solar energy for our country. One key to that success will be our ability to harness solar power for use when the sun is not shining," said Sen. Bingaman. "I applaud the Department of Energy, PNM, and the Electric Power Research Institute for advancing this storage effort, and hope that it will be the first of many similar projects around the country."

U.S. Senator Tom Udall echoed those sentiments, saying, "New Mexico is a leader in renewable energy and smart grid technology, and I congratulate PNM for their success on this project which will help lower the costs and increase the use of renewable energy in New Mexico and across the country."

The genesis of this project began in 2008 when PNM and the Electric Power Research Institute began planning a project to demonstrate smart grid technology in PNM's distribution system. When the U.S. Department of Energy announced its Smart Grid Storage Demonstration Program supported by funds from the American Recovery and Reinvestment Act of 2009, PNM and EPRI quickly reshaped their plans and submitted a proposal to federal officials.

Sen. Bingaman strongly supported the PNM-EPRI proposal in a letter to DOE officials, saying the project "would unlock numerous benefits to the people of New Mexico and the citizens of the United States, including green job creation, development of green manufacturing, and sustainable renewable energy development."

In November 2009, PNM announced it was among the utilities awarded federal funds for a smart grid project, now known as the PNM Prosperity Energy Storage Project. The project features one of the largest combinations of battery storage and photovoltaic energy in the nation and involves extensive research and development of smart grid concepts with EPRI, East Penn Manufacturing Co., Northern New Mexico College, Sandia National Laboratories and the University of New Mexico.

"Our goal is to identify, test and demonstrate the numerous benefits derived from this storage system," said Steve Willard, a PNM engineer and the project's manager. "While construction of the project is completed, our research has just begun. During the next two years, we'll constantly collect data and share our findings with the industry worldwide to help advance energy storage technology."

Other New Mexico companies that had significant contributions to the project include Albuquerque's SCHOTT Solar, and Cameron Swinerton and Positive Energy, both based in Santa Fe.
Posted by Unknown at 8:31 AM