The expected proliferation of electrical smart grids during the next decade will generate nearly $6 billion worth of demand by 2020 for lithium ion batteries used mainly in energy storage systems, according to the IHS iSuppli Rechargeable Batteries Special Report. From its starting point in 2012, the market for lithium ion batteries in smart grids is set for rapid growth, as presented in the figure below. 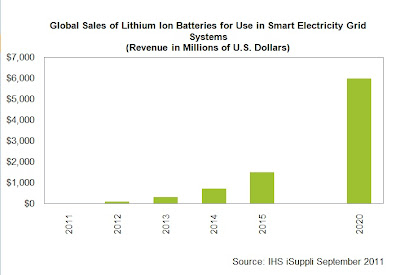 "Smart grids require rechargeable batteries to adjust to fluctuations in demand and to optimize the delivery of electric power throughout the system," said Satoru Oyama, principal analyst for Japan electronics research for IHS. "With their inherent advantages compared to alternative technologies, lithium ion batteries are uniquely suited for use in smart grids. Because of this, lithium ion is set to emerge as the dominant rechargeable battery technology for electrical smart grids during the coming years."

Smart grid energy storage comes in multiple form factors, ranging from single-home systems to a cluster of homes or a building, to uninterruptible power systems for corporate information technology (IT) operations, to large-scale systems used by grid operators. Energy storage is used for purposes running from grid stability to backup power for IT, to extending wind and solar energy capture into the evening, the report notes. An advantage to lithium ion batteries is that they maintain full capacity even after a partial recharge. Furthermore, they are considered to be more environmentally safe than other battery technologies.

Beyond smart grids, lithium ion batteries are employed in a wide range of applications, including mobile handsets, notebook PCs, tablet computers, and hybrid and electric vehicles.

IHS defines a smart grid as a utility electricity delivery system that employs computer and communications technology to improve the flexibility and efficiency of power distribution. In conventional power grids, power flows just one way, going from large-scale power generators to users. Smart grids, in contrast, can accommodate and control electricity that is generated both by big utilities and by individual consumers and businesses. This makes smart grids a key element in utilizing and redistributing the energy generated by solar systems installed by electricity users. Development of smart grids is being spurred by various government initiatives throughout the world. For example, the United States has budgeted $4.5 billion for the purpose. Meanwhile, China is expected to become the largest smart grid market in the world, with $586 billion set to be invested in the electrical power supply infrastructure during the next 10 years.
Posted by Unknown at 7:46 AM